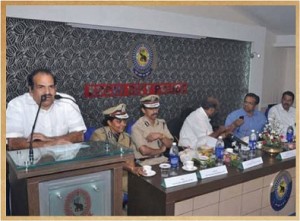 CENTRE FOR CREATION OF TRAFFIC AWARENESS

A ‘Centre for promoting/creating Traffic Awareness’ was inaugurated at the office of the Assistant Commissioner of Police (Traffic), Kochi, Kerala. Through this measure an ongoing and effective effort is being made to awaken in the offenders, a sense of awareness of the magnitude of the harm that could result from such flouting of traffic rules and also teach them how their own lives could be safer and easier if every driver and pedestrian on the road follow the rules.

As a CSR initiative of the Muthoot Group, with the support of Muthoot M George Foundation a “Traffic Awareness Creation Centre” was inaugurated at Kochi. This Centre located at the office of the Asst. Commissioner of Police (Traffic), close to the High Court.

Inaugurating the facility the Honorable Minister (Home Affairs) Mr. Kodiyeri Balakrishnana, congratulated the initiative of the Kochi police and appreciated the support given by the Muthoot M George Foundation and gave a memento to Mr. George Alexander Muthoot, Managing Director of Muthoot Group. Mr. Jacob Punnoose, DGP, Dr. Sandhya IPS and Mr. Manoj Abraham, Commissioner of Police were present on this occasion. The centre is the first of its kind in the country and a proud achievement for Kerala Police & Muthoot M George Foundation.