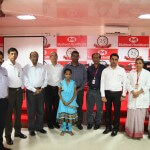 LIGHTING THE UNLIT……CHARLY TREADING THE UNTRODDEN

Muthoot Healthcare, guided by the visionary leadership of Dr.Georgie Kurien, has once again unfurled its flag of social responsibility by championing the voice of the unheard. A Total Hip Replacement (THR) of the left hip was successfully performed by the proficient team of Orthopaedic surgeons on patient Charly in November this year.

The 19-year-old youngster from Chenganoor in Alappuzha District was forced to discontinue her much-cherished course in fashion designing when she found herself having to grip the harsh reality of being afflicted with rheumatoid arthritis. The debilitating effects of the disease resulted in associated problems ranging from thyroid problems, growth hormone deficiencies, tissue inflammation, reduced physical capacity, all of which compounded the suffering of the patient.
When Mathrubhumi, the daily Malayalam publication catapulted Charly into the hearts of the malayali reader, Muthoot Healthcare rose to the occasion to provide the much-needed succour for the teenager and her sibling Chandini, a nursing graduate, both who lost their father in their early childhood and were brought up singlehandedly by Indira, their mother, who worked as a domestic in various homes.

After a preliminary visit to Charlie’s house by the Healthcare team comprising Dr. Muralikrishnan N and Dr. Praveen C R, Orthopedic Surgeons, Mr. Mathew Kurien, General Manager-Operations and members of his team to assess the merits of the case, a decision was taken by Dr.Georgie Kurien, the Executive Director to conduct the surgery absolutely free-of-cost.
Charlie, who has been able to progressively take short strides after the surgery, may require a Total Hip Replacement of the right hip and Total Knee Replacement if she doesn’t respond favourably to the three-month course of medication.
The concerted efforts of the dedicated team of Orthopedic Surgeons, Anaesthetists, Endocrinologists, Physicians and Healthcare workers have given Charlie renewed vigour and hope for the future. Tears mingle with smiles with every short step she takes, as she reminiscences the easing of her long-standing suffering. The healthcare institution’s gesture of taking Chandini on board as a staff nurse, broadens Charlie’s smile, for now, there’s a way to battle the drudgery they had for long been living with.