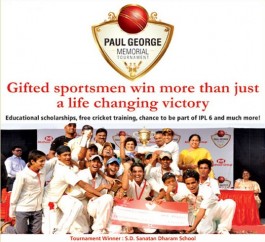 Constituted in memory of our beloved Executive Director, Late Shri Paul M George, Paul George Memorial Tournament is a sports platform created for government school students who have been unable to get an opportunity to showcase their cricket talent. The tournament in its first edition witnessed 128 students from 8 Delhi Government schools. The winning team was awarded with Rs 50,000 and the runner-up team with Rs 25,000. An educational scholarship of Rs 10,000 has also been awarded to the best player from each team while two other best players have been selected as the ball boys for the Delhi Daredevils home matches in the IPL season VI. 8 Most Valued Players selected from the 8 teams as well as 15 Man of the Matches during the Tournament are also being trained at the St. George’s Sports Academy for a year without any fee.