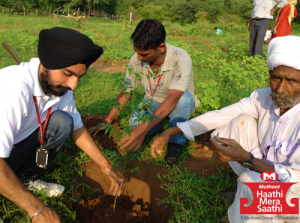 In August 2013, a small contingent of employees from the Alwar region and Delhi Region went to Sariska National park and planted the promised 104 trees in association with Grow-Trees.com and KRAPAVIS (associated NGOs).

The trees were planted on protected land far from the reach of urban stresses. The NGOs are dedicated towards ensuring the survival of the saplings. The saplings will receive only naturally procured fertilizers and will hence not be adding to the toxicity of the soil around them. Several saplings were those of fruit bearing trees, which will in turn allow the local population of the region to use the produce for their everyday trade and consumption. The initiative also indirectly contributes to the preservation of the green cover found in Sariska National Park and it’s surrounding areas hence preserving the habitats of endangered species such as the famous Royal Bengal Tigers of the region.